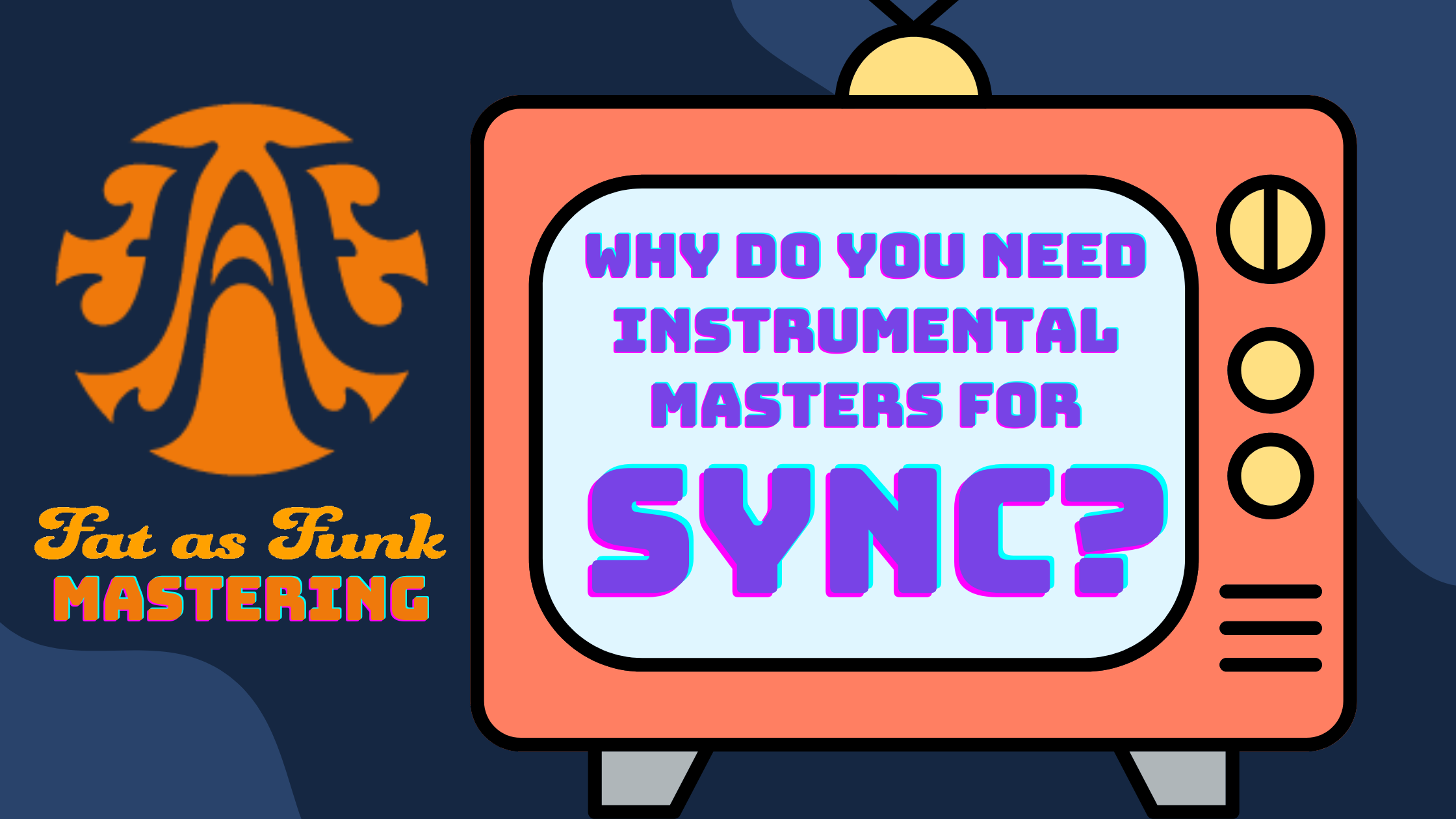 What is Sync Licensing?

How do artists make money from their music in 2022? Getting your music on TV or in movies, games or advertising is one of the most lucrative ways for musicians to earn serious money. This process is called “Sync Licensing”.

“Sync” is short for synchronisation. In music industry terms this simply means using music synched up to visuals in a project – almost every advert, TV show, movie or video game uses music synched up alongside the visuals. The process of a company licensing a track from an artist or agency to use in this way is known as Sync Licensing.

It is still common to land deals worth several thousand pounds, even for emerging artists (Fat As Funk works closely with various sync agencies in the UK and USA and has helped land artists many sync deals).

An instrumental is simply a version of your song with the lyrics or vocal tones silenced. Even slight vocal effects or “oohs / aahs” need to be muted for an instrumental version, but the underlying track tone and arrangement is identical to the main version. It is standard professional practice to get instrumental masters done at the same time as getting your main mixes mastered.

Why are instrumental versions so essential for sync licensing?

Often a music supervisor (the person responsible for choosing the music for a visual project) loves a track, but the project requires music with no vocals.

This could be for many reasons, including having a spoken voiceover which song lyrics would mask – and for the client, their message is the most important thing, and ultimately what they are paying to convey.

Some videos just work better with instrumental music! Lyrics could distract from the visuals, or dilute the message.

Often a TV show or movie will use both the vocal version and instrumental mix! Editors can use a vocal song where the lyrics help the scene, then cut seamlessly into the instrumental when the characters are speaking, so their dialogue comes through clearly. This flexibility is golden to editors, and music supervisors expect this flexibility.

Is it possible to get instrumental versions from vocal mixes, if I don’t have the project any more?

YES! We can remove the vocals from your mix as if by magic! Results are usually super-clean and often sound identical in quality as if you made an instrumental mix from the original project file.

Occasionally the process can leave slight vocal artefacts behind with some tracks, but it will be good enough to supply to a music supervisor with your main mix, and even worse-case will certainly be good enough to use behind dialogue.

Having an instrumental version is the difference between a music supervisor choosing your track over someone else’s. It is an essential part of the modern music industry, and even if you are not yet in the position to have music supervisors listening to your tracks, it is a no-brainer to get instrumental masters done at the same time as your regular mastering job.

We can also magically separate your track into its component parts (“Stems“) which can be even more useful for music supervisors. Check out our Magic Stem Creation Service too!

Getting Your Instrumental Versions Mastered

To get a hugely discounted rate on instrumental mastering, you should order the alternative instrumental versions at the same time as getting your regular masters done.

Just upload your main mixes and instrumentals to us (or order our magic instrumental creation service if you don’t have them already), then order Stereo Mastering (for the main masters) AND Alternative Version (for the discounted instrumental mastering).

We are offering a HALF PRICE deal on Instrumental Mastering until the end of August 2022. Just order as usual and enter the code: SUMMER22ALT at checkout!

To be extra-clear, if your track is only an instrumental anyway, you only need to book the main Stereo Mastering. If you are using our magic instrumental mix creation service, you still need to purchase the Alternative Version too, as these are separate services.